A blog about miscarriage, pregnancy, childbirth, and the postpartum period that talks about everything no one talks about. Input WELCOME, email me at Swedishskier@gmail.com with suggestions, additions, or guest post submissions.

I posted this interview with a dad. A dad. NOT MY dad. There was some confusion over that last time and while my family's pretty liberal, this is not a conversation I would have with my own father. So anyway, this is the second of this series of interviews. I'm hoping for at least one more dad to interview, but we'll see. If you know a dad or ARE a dad that would be willing to be interviewed: please let me know.

What was sex like for you when your wife was pregnant?

My wife had a lot of nausea the first half of her pregnancy, so we didn't have a lot of sex. The routine aspect of sex while trying to conceive was something I disliked, believe it or not. It took away all the spontaneity, so it was nice to have it be more like it was before trying to conceive.


What things helped your sex life during pregnancy?

We got a little more adventurous with positions during pregnancy to get around the awkwardness as she grew. Some folks said doggy style works well, but we just found it ridiculous. Scissors style was easier for her, but her on top was best. We generally do her on top now.


Were there things throughout pregnancy/childbirth which took adjusting to? What were they and what helped in the adjustment?

The emotional swings of my wife were hard. If I wasn't in the mood, she'd take it pretty hard and it would only add to the feelings that she had about getting larger, not feeling attractive, etc.


Describe your experiences with sex immediately after your wife gave birth.

We took some time before having sex again. We are generally a low-sex couple (two to four times a month) but we went for a couple of months without any. We were both too exhausted and just didn't feel very sexy.


What advice could you offer dads about sex during pregnancy?

Remember that her emotions can be dialed way up, so being tender, caring and attentive is even more critical than ever. Tell her she's beautiful all the time. Also, her breasts (which have always been her most key erogenous zone) were tender so I had to change some of my nibble habits!

After birth?
My wife is much more likely to climax after her pregnancies. I think sex is generally more enjoyable for her because of this. The milk issue was tough though. She likes a lot of breast play (I do too!) And we had to pretty much shut that down for a year or so while nursing.


What advice could you offer moms about sex during pregnancy?

Not all guys are sex maniacs, so don't be insulted when we're not into it sometimes. Be ready to discover new and improved approaches to sex as the pregnancy goes on.

For us, sex after pregnancy (now, years after) is much better than before, largely because she's more likely to climax. We didn't expect that at all, so it was a great outcome!
Posted by Karin Mitchell at 12:47 PM 2 comments:

Email ThisBlogThis!Share to TwitterShare to FacebookShare to Pinterest
Labels: for the mens folk, guest post, sex, shit that happened to other people 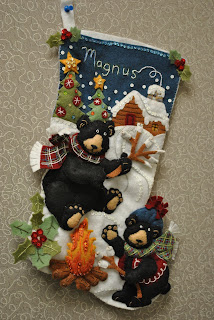 But... yeah, sorry for not posting.

I was busy sewing this for Magnus's first Christmas. But I have NOT abandoned this project and I WILL be posting more regularly. Cross my heart and hope to have another baby.
The other shit that's been going on is that I've had THREE, countem THREE procedures to repair my nanny after all this baby-having stuff. Its all been minor, but when you add stitches + stitches + stitches it equals = NO SEX and no skiing and kinda sucks. I'm thinking I'm in the home stretch now though.
Thankfully, I'm not only good at laughing at myself but good at when you all laugh at me too. I was in the parking lot today with some coworkers as they made jokes about the hole in my labia and wouldn't it be funny to string one of those wallet chains through it and have your wallet in your back pocket. There were gestures involved. GESTURES!
It was funny.
So yeah. I do intend to write about sex after childbirth. I just have to have it first. I'm sure it will be magical. Or something.
Posted by Karin Mitchell at 3:40 PM 1 comment:

The Male Perspective on Sex

There are ways that we all edit ourselves. Things we might think, but wouldn't say to our significant other. For example, my husband would never say I looked fat in anything. Nor would he tell me I looked like hell. Nor would he likely tell me the honest truth about my vagina after delivery. Especially if it looked like fat hell.

So since I wanted to find out what men think about sex during pregnancy and after birth, I went to TBK and asked her who she might know that I could interview. (Being as how she's the source for all things sex related and how nice and helpful she is by nature, I figured she'd have the answers or get them.) She got me in touch with Reverend Matt from over at www.thecollectionblog.com, to do the first of 3 interviews with men about their perspective. Reverand Matt was nice enough to allow me to interview him about the nitty gritty details of sex and pregnancy and all that stuff. He provided me with concise, open, honest answers and did so promptly too! Don't worry, I even asked him vagina questions. You're welcome. Without further ado:

What was sex like for you when your wife/partner/gf was pregnant?

In our first pregnancy it was a pretty 'normal' pregnancy. Because we went through infertility treatments at first we were a little cautious, but by the time the 2nd trimester hormones kicked in and her sex drive returned we were more comfortable. After orgasm she would get cramping, which worried us a bit but her OB said that's fine and normal and not to worry about it.

How do you think fertility treatments affected your sex life?
Fertility treatments did affect our sex life in many ways. For me personally sex became a chore. There were specific days and times we HAD to have sex and ones where we shouldn't because there was no chance of conception and we didn't want to waste anything in the days leading up to the fertile stretch. It was tremendously stressful and cause me a great deal of anxiety about sex while we were going through it. Once we successfully conceived it became much easier to deal with sex again.

What things helped your sex life during pregnancy?

Communication. Reassuring her and making her feel beautiful.

Were there things throughout pregnancy/childbirth which took adjusting to? What were they and what helped in the adjustment?

Almost everything took adjusting to. Sometimes she was more interested in being made to feel pretty, loved, secure, cared for, and sex wasn't really appealing to her. Other times she was ready and eager for it but would get morning sickness in the middle. Being understanding of moods and emotional needs and etc is critical.

Describe your experiences with sex immediately after your wife gave birth.

She had severe post partum depression, there was not really any sex to speak of for a while. Once there was again there was some adjustment as the uterus has been through some big changes and she had some tearing during delivery which was still healing and sensitive.

What advice could you offer dads about sex during pregnancy?

Listen. Be understanding, patient, and willing to take care of yourself without pressuring her if need be. Reassure her that she's beautiful and you love her and everything is going to be OK.

What advice could you offer moms about sex during pregnancy?

There is limited advice I can provide women about sex during or after pregnancy except to communicate. Overcommunicate. Make sure you are being as clear as you possibly can about your wants, needs, and limits.


If your wife had a vaginal delivery, how did that change the sensation of sex for you? Visually could you tell? How did you feel about it?

The first was a vaginal delivery. It altered the layout of the whole region a bit (I would say tilted everything slightly back and maybe altered where various nerve endings etc were located). Visually it wasn't noticeable, but it was noticeably physically. I was fine with the changes, it all changes a little bit over the course of each cycle and with age/weight loss/weight gain/etc etc. It's not enough of a change to make sex more or less pleasurable. The second was a c-section which obviously didn't alter sex in any way post delivery.
Posted by Karin Mitchell at 8:11 AM 9 comments:

When eating for two feels like being all alone

Before being pregnant, I had many friends with children. It probably happens because I love kids. I was a special education teacher for 5 years and the part that was the best about it was kids. I like all ages of kids too: toddlers, tweens, teens.

So since I have so many friends with kids, I didn't realize how isolating pregnancy can be. Until I was pregnant. And suddenly, I wasn't invited anymore. It wasn't a malicious thing on anyone's part. Its just that a lot of my friends are drinkers, and athletes. And a lot of what we do together is sports and drinking. Most times when we go out, I drink, but sometimes not. Sometimes I'm the DD or I just don't feel like it or I have one beer and call it good.

While I stayed active during pregnancy, you just can't go ski off a rock, or drink until 1 am. And so suddenly, I found myself alone a lot. Now, I like being alone. So it actually took me quite a while to notice that I hadn't been seeing people a whole lot. I'm lucky that way. And I didn't generally take it too personally. But I was pregnant and there's hormones and and and I'm not going to pretend I didn't ever feel left out.

But as I said, I like being alone. And I was busy overeating and sleeping a whole lot and enjoying doing a lot of reading so it wasn't too bad. But I'm pretty sure lots of women feel very lonely while pregnant. And you're supposed to be so happy and flowery that its hard to mention it to anyone. Especially when all people want to talk to you about is pregnancy. Then next thing you know it, all you can talk about is pregnancy and the baby babybabybaby. And you just don't feel like you; you feel like giant, all-alone you.
Posted by Karin Mitchell at 8:17 AM No comments:

Karin Mitchell
I am afraid of changing lightbulbs. I HATE feet. I hate condiments. Vinegar is disgusting. I check behind the shower curtain of people's houses because I'm the kind of person who would hide there to scare someone. When I was six I went to school with my coat and no shirt on. When I was 10 I didn't brush my hair for 4 months. My favorite errand is going to the library. I will pull things out of the trash to recycle them. I hate country music and jam bands. I have great aim when throwing things even though I can't play an upperbody sport to save my life. I like dark art. I trust scary looking people almost immediately.